It has been a quiet afternoon for watching COP, with little news emanating from the black hole. We can only hope that they got through the main items on the agenda and are on track to tie everything up tomorrow.

There has, however, been a backlash from the Philippines about the two “dirty ashtray” awards the Framework Convention Alliance handed the country in its bulletins this week. The Philippines Department of Health objected to the video statement made by the lead of its delegation, Foreign Affairs Secretary Teodoro Locsin Jr, but Locsin has had forthright backing from his government in two articles published today.

The Inquirer reported that “Deputy House Speaker Deogracias Victor Savellano and Surigao del Norte, 2nd District Rep. Ace Barbers … lashed out at “extremist critics” of Locsin and his team for their disrespect of our country’s sovereignty.”, the high-ranking officials went on to say “We support the Philippine delegation to the WHO FCTC ninth Conference of the Parties headed by Sec. Locsin for pushing for an inclusive and participative decision making in crafting global policy recommendations. Tobacco control approach cannot be one-dimensional.”

The Manila Bulletin covered the story too, quoting Savellano further, “We support and commend Sec. Locsin for safeguarding the rights and welfare of all stakeholders and carrying the Philippines’ position to adopt a balanced and evidence-based regulations in tobacco control”.

Peter Dator of consumer association, Vapers Philippines, sent a supportive message to the Philippine delegation, which was first shown on sCOPe

It was curious to discover that the FCTC had deleted a tweet posted on November 8th stating that it is the Parties to the Conference which are the governing body of the FCTC. As the tweet states, this is basic information on the treaty, so it is puzzling why it was removed. Is there any reason why this is no longer the case? 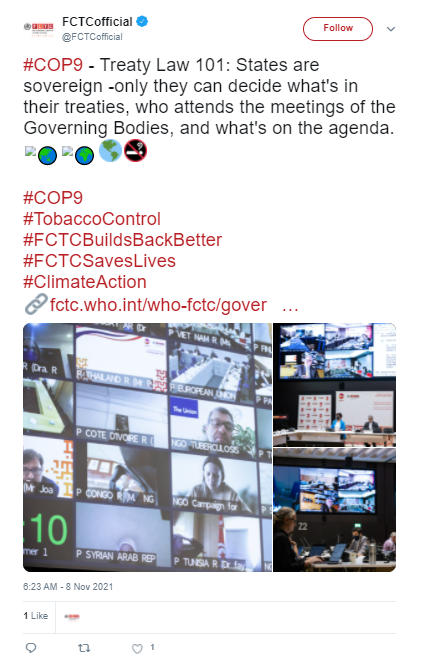 On a matter of housekeeping, links for the FCA daily bulletins have moved, so we have changed them in our COPWATCH live articles. Each bulletin is provided in PDF format which can be saved locally should you wish to ensure they do not get lost again. We do.

Before we show you our favourite tweets of the day, it has been encouraging to see the conference hashtags dominated by an eclectic mix of pro THR tweets. #COP9 and #COP9FCTC are overwhelmingly supportive of the consumer position, and it is interesting to note that even FCTC does not use the official #COP9FCTC tag which they have been urging on delegates throughout the conference via the daily journals. Lately, the FCTC account seems to have abandoned the hashtags it previously promoted.

Now you’ve read this, do go and catch some more of the fantastic sCOPe streaming, on YouTube here.

See you tomorrow for what we hope is the final day of COP9.

Good morning.  Day 4 of COP has begun.  From Journal 4 and the FCA bulletin we learn that the morning’s business is regional meetings, followed by the Committee B’s Fifth Committee meeting and then the Fifth plenary. There are new additions to the main documents page, the First report of Committee A (decision on NGO’s maintaining their observer status) and the Second report of Committee B (deals with the investment fund, do see our update from last night for discussion of their first report).  Today should see a decision on who is to host COP10 (it will not held in Geneva).  Of course, there is no publicly available information on which parties have applied for the task (as if taxpayers would have any interest in that!).

As seems to be customary, the FCA bulletin is giving more information than is in the official documents (the FCA is just a NGO, with no formal powers).

Yesterday the Iranian president of COP invited the Iranian delegation to consider the draft declaration on WHO FCTC and recovery from the COVID-19 pandemic. Following an invitation from the President, the delegation of the Islamic Republic of Iran introduced the draft declaration and comments were invited from the floor.  Iran’s state media outlet has reported on that here – giving much more of a focus to Iran’s ownership of the declaration than the FCA – which doesn’t mention Iran at all.
https://en.irna.ir/news/84535684/Iran-reminds-nations-of-shared-responsibility-towards-outcomes

While we are on the FCA bulletin, the NGO has used its privileged position this morning to again slap down the Philippines delegation.  (As we reported on 9 November: A robust statement came out in a video from the Philippines last night, with a call for active participation from all Parties and inclusive consultation with all stakeholders. It stated that the Philippines will not be banning e-cigarettes and recognises the fundamental differences between various tobacco and nicotine products”) . The FCA is also passing judgement this morning on the Brazilian government’s choice of delegation.  Parties nominally hold all the power at FCTC COP – in light of that, how can this level of interference from FCA be tolerated?

Committee B endorsed the Secretariat’s proposal to establish an Investment Fund. It states that it “may also receive financial inputs from other public and private sources that meet the requirements of Article 5.3 of the WHO FCTC”. This means that the FCTC is seeking funding from outside its usual channels and the only criteria is that those funds cannot come from what the FCTC defines as the tobacco industry. That does not include pharmaceutical interests or, indeed, Bloomberg Philanthropies. It also opens up the possibility of private businesses with no connection to the tobacco and nicotine debate becoming financial stakeholders in the FCTC, while relevant businesses and consumers are totally locked out.

Interesting to see that SEATCA is this morning celebrating increased transparency at COP, with the inclusion of accredited media.  We can’t see that those journalists are doing any reporting.  Last night we reported that there is a target to invite just one new NGO application for Observer status, by 2023.  We see no evidence that FCTC COP is working towards increased transparency. 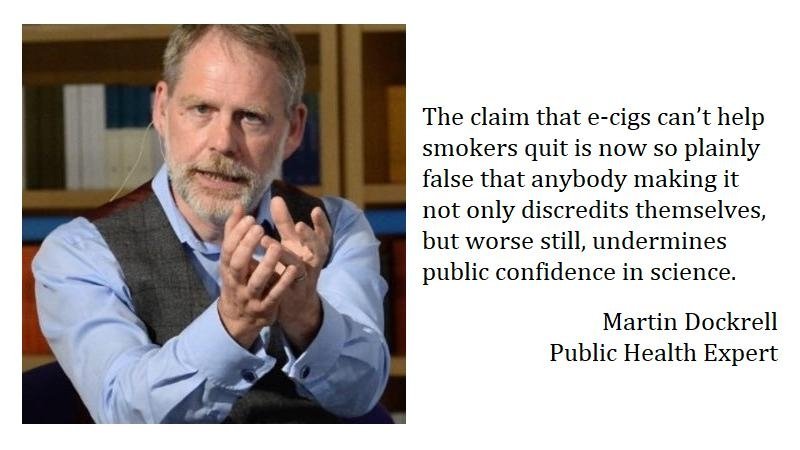